I feel compelled to recommend a book I have just recently finished.
Without exaggeration, I would call it essential reading for every American.
Have you ever wondered what sudden phenomenon caused the giant leap in civilization? 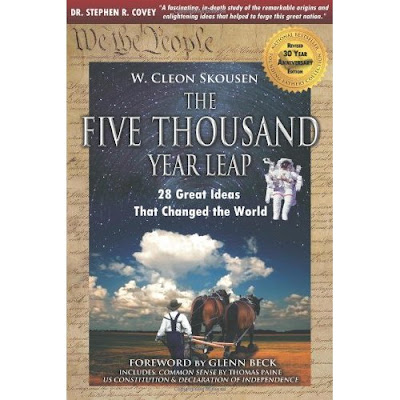 :epiph-a-ny/ sudden manifestation or perception of
the essential nature or meaning of something.
~~~~
As I began reading this book I realized almost immediately that it would cause a huge leap forward
in my understanding and comprehension of the foundations and underpinnings of our amazing country
and why we have been able to prosper in freedom. (Also, perhaps, the reasons why we may be close to losing it all.)
But most importantly, in these pages, I found hope.

In 'The Five Thousand Year Leap', W. Cleon Skousen has done a masterful job
of outlining the basic principles -
or, as he calls them - '28 Great Ideas That Changed the World'.
America's exceptionalism and uniqueness are outlined and
its Founders quoted extensively throughout the book. Not only are its
Founders quoted, ( Jefferson, Madison, Franklin, Adams, etc.)
but also the great thinkers whom they actually considered as their pattern
while crafting our Founding documents : men like
Polybius, Cicero, Thomas Hooker, Coke, Montesquieu, Blackstone,
John Locke, and Adam Smith.
The framers were also careful students of the Bible.
Amazingly, though they came from widely divergent backgrounds,
they shared the experience of having read and studied
the same great books.

Their historical readings included a broad perspective of Greek,
Roman, Anglo-Saxon, European, and English history.
To this writer, nothing is more remarkable about the early American leaders
than their breadth of reading and depth of knowledge
concerning the essential elements of sound nation building.

This, he feels, explains their remarkable unanimity in fundamental beliefs.

On particulars, of course, they quarreled,
but when discussing fundamental precepts
and ultimate objectives they seemed practically unanimous. [ ]
From all of these valuable sources they sorted out what they considered
to be the best and most enduring for the prosperity and peace
of a free people under a republican system of self-government.

Get a copy of this book~read it for yourself~pass it on to someone you know!
Posted by Mon Cheri at 6:11 PM 2 comments: I Wish You a Wave O' The Sea

When you do dance, I wish you a wave o' the sea,
that you might ever do nothing but that
William Shakespeare An inexhaustible good nature is one of the most precious gifts of heaven,
spreading itself like oil over the troubled sea of thought,
and keeping the mind smooth and equable in the roughest weather.

Labels: Out With Family A Soft Release From Man's Unrest Unto this wood I came As to a nest;
Dreaming that sylvan peace
Offered the harrowed ease-
Nature a soft release
From men's unrest The Girl Who Keeps Chickens

In my opinion the girl who can manage a flock of chickens can probably do anything. For some girls, turning 14 can be complicated. But Ilex has no problem with it. (Having those chickens must contribute,right? to say nothing of a loving, stable family, Aunts, Uncles and Grandparents who adore her!) So for her birthday we added to her flock,
with some new chicks, (arriving soon by air mail)
that will, when grown, lay wonderfully pastel colored eggs.
Also a quirky sign for the chicken coop! (crafted by Shannon) These are not the beaches of Normandy nor the sands of Iwo Jima or the shores of Hawaii. Just our beautiful
Pacific coast of Oregon. But no less necessary to defend.


"Freedom is a precious thing,
it is never a guarantee,
it is not ours by inheritance alone,
it must be fought for
and defended by each generation"
~ Ronald Reagan ~
~~~~

For the past few weeks I have been contemplating
this theme relentlessly.
I've been like the sleeper who is struggling to wake
from a pleasant and beautiful dream,
who was too groggy to realize...
the smoke alarm has been shrilly blaring.
Is it too late to save the house?
Shall I run out the front door in my pajamas?
Do I have time to gather a few precious things?
(like the freedoms that yet remain?)
Perhaps a bucket brigade can still be formed
to save the house.
But it takes a lot of people to pass the buckets
and a large supply of water.
And I hope the doors aren't locked and
bolted on the outside.
I'm only one small person with one small bucket.
(Oh politics! That negative subject that seems so impossible to understand,
and so very impolite to talk about at a party.
How can I decipher whether what I read and hear is true?
It is just too complicated and confusing. Let others, smarter than I, figure it all out.
I don't have time, I'm way too busy.)

~~~~~
“Experience hath shewn, that even under the best forms (of government)
those entrusted with power
have, in time, and by slow operations,
perverted it into tyranny”

“All tyranny needs to gain a foothold is for people of good conscience
to remain silent.”

~Thomas Jefferson~
Good intentions will always be pleaded for every assumption of authority.
It is hardly too strong to say that the Constitution was made to guard the people
against the dangers of good intentions.
There are men in all ages who mean to govern well,
but they mean to govern.
They promise to be good masters,
but they mean to be masters.


[On ancient Athens]: In the end, more than freedom, they wanted security.
They wanted a comfortable life, and they lost it all – security, comfort, and freedom.
When the Athenians finally wanted not to give to society
but for society to give to them, when the freedom they wished for most
was freedom from responsibility, then Athens ceased to be free
and was never free again.

Plant on a whim.
Lay the footpath where your heart says it should be.
Change things because you feel like it.
Garden for the love of it.